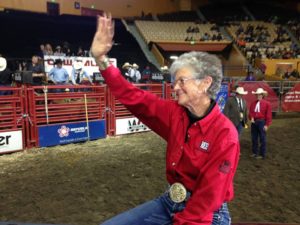 Melanie Fowle, past CCW and ANCW President was honored as Cattlewoman of the Year at the Cow Palace Rodeo October 2016.  Several CCW Presidents were in attendance for the elegant luncheon served by Flying U Rodeo Cowboys and Cowgirls.