CCW at ANCW in Tampa Bay Florida An Introduction 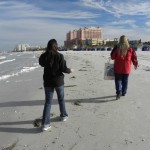 Past National Beef Ambassador, Malorie Bankhead and senior at Cal Poly wrote
on FaceBook: “Heads Tampa Bay, tails California”. This past week interning
at the national annual cattle industry convention was absolutely phenomenal!
Here’s to old friends, new friends, real friends and true friends. For yet
another time I am grateful and humbled to be a member of the beef community.
It isn’t possible to find such amazing people anywhere else folks. Thank
you! Love to you all and hope for safe travels home. Happy trails…until we
meet again!”

Malorie wrote her feelings about the past week, and I agree with her; the
friends we see twice or three times a year and making new friends.  Over a
hundred cattlewomen from across the nation, Florida to Washington and
Hawaii, were in Tampa Bay for our annual convention with a theme of Boots on
the Bay.

A Gasparilla Pirate Fest was celebrated one night, with colorful beads,
lively pirates, music and plenty of grog and local eats (alligator was one).
It was to be held on the waterfront, but rain moved the party indoors.  At
the opening session of the cattle industry convention for about 6,000 people
we learned and saw pictures of the festival.

Gasparilla was inspired by the legend of Jose Gaspar, a Spanish nobleman and
naval officer who turned to piracy.  Supposedly, he sailed from a secret
island base south of Tampa, plundering ships in the Gulf of Mexico and along
the Spanish main from the late 1700’s until 1821.

There are no contemporary records of Gaspar ever operating in the area or
battling the US Navy.  The first written account of Jose Gaspar was a 1900
advertising brochure, and subsequent tales of the pirate Gaspar are based on
that fanciful brochure.

The next evening the Cattlemen’s Beach Bash with The Beach Boys featured
Gasparilla fireworks, and followed by dancing at the Hot Havana Nights After
Party with the Bellamy Brothers, sponsored by Bayer Animal Health.

California is excited to have Melanie Fowle, Etna cattlewoman, elected as
Vice President for the American National CattleWomen, and President is
Barbara Jackson, Tucson, AZ, who grew up in the beef industry.

Jackson is following in the footsteps of her mother, Pat Stevenson, who was
ANCW President in 1970.  Her family has owned and operated Red Rock Feeding
Co; a 30,000 head feedyard in Southern Arizona since 1964, and today she is
part- owner of the operation.

California’s John Maas, DVM was named the National Beef Quality Assurance
Educator Award winner at the 2013 Cattle Industry Convention in Tampa, Fla.
Maas, who has been instrumental in BQA in California for many years was
nominated by CCA and the California CattleWomen, Inc.

“In his nomination letter last fall, Past CCA President Kevin Kester said,
“John Maas has been dedicated to this cause from its inception and has never
been afraid to face the challenges California and our nation are faced with.

“A state known by its peers for its strong BQA outreach efforts,
California’s BQA programs would be non-existent without Dr. Maas. As a
pioneer in California and the nation’s earliest BQA days, John Maas has
spread the message of BQA tirelessly and has been instrumental in the
program’s success.”

Tehama Co. Cattlemen and CattleWomen congratulate Dr. Maas on this much
deserved honor.

In late spring, nearly half of the cow herd is moved to summer mountain
ranches in Northern CA and Southeastern OR.  These cattle remain until the
fall rains germinate annual grasses on the CA winter rangelands.

Most of  Sparrowk Livestock’s calves are marketed directly to feeding
companies or through video markets, depending on market conditions.  About
400 replacement heifers are retained annually.

Improving stock water quantity and distribution has long been a priority.
Over time, solar panels and pumps have replaced several windmills; water
tanks; miles of pipe and many troughs have been installed.  These projects
have significantly increased carrying capacity.

I flew into Tampa early in order to go sightseeing with CCW president Tammie
McElroy.  The hibiscus in many colors, bougainvillea, Siberian iris,
oleanders and red geraniums  were in bloom, green grass and palm trees
everywhere.

The locals were talking about how cool it was, since it was 40 – 64’F when I
arrived, but my last day was 80’F and very, very humid since we were on the
waterfront.

Monday morning everyone was talking about the Dodge Ram Tough commercial,
“So God Made a Farmer”- Paul Harvey, during the Super Bowl, when the SF
49ers almost won.  The cover of our USA TODAY was a four page advertisement
with the complete words of Paul Harvey.

We also liked the Budweiser colt growing up, and the Taco Bell senior
citizens with their sneaking out of their retirement home; getting tattoos
plus having fun.

Our ANCW meetings were productive and interesting.  Good speakers. Glad I
was at Tampa on the Bay, and will tell you more next time.